There was a computer game that I played when I was younger and pc monitors only had 4 colors. For some reason the first thing that I thought of when I saw this card was in implementation of that game, Battle Chess!

Battle Chess didn’t have any special rules, it was just Chess where the pieces would come to life and smash each other whenever a piece was captured. My first inclination was a drafting game where you draft then play cards against each other to see who wins that hand of Chess. The problem with that is the fact that a queen would simply win all battles. I have to introduce things like component powers and… you guessed it, set collection!I’m not 100% set on drafting as the method by which you collect cards, but we’ll go with it for now. A deck of cards will sit in the middle of the table. A row of five cards are set face up, and in turn each player will choose and take a card to their hand. Once All five cards are drafted, the players will each play a card or cards from their hand. These cards will be compared and a winner will be determined. Cards can be held from round to round, so as the game progresses the players will be able to build better and better hands to play, and an additional bonus is that the cards that a player has drafted will be harder and harder for the opponent to remember. That is where the set collection aspect will shine. Whether the winning hand is three pawns or a knight combined with a Bishop, or even the dynamic duo of Queen and King, players have to collect sets and battle them against each other to win.

Battle Chess is a drafting/set collection card game in which players draft the best cards to build sets then battle those sets against each other to determine who will get Checkmate.

I am going to pop in here with some game design epiphanies from time to time. Most likely it will simply be a short paragraph or two describing the epiphany that I had, and then, ideally, it will spark some discussion.

I had a game idea percolating for a long time. I decided yesterday that I would make it a simple card game instead of the massive board game that I had initially envisioned. That in and of itself was truly an epiphany and got me from concept into actual design… really, in my Google Docs folder I moved it from the Brainstorming folder it was in to its own game folder!

However, that isn’t the epiphany that I wanted to write about today. As I sat down to design the cards for this game, I got hung up on the theme. I was trying to come up for names of rooms and names of components and resources, and in the end I didn’t need to. Even though the idea for this game was born from a theme, it can be boiled down to letters or numbers alone. I have cards that require resources. I have  cards that create resources. Those resources don’t need names, they can just be “A” through “E”.

This early in the design process all you should be doing is testing the desired systems to ensure they aren’t broken. Theme, characters, resources and the like can all wait until you  are ready to play-test with a wider audience.

Last year at some point I received a Kickstarter project that I had backed in 2016. It is called Gamer Deck 1: Mechanics. A standard deck of playing cards containing a suit, a die, a number and a mechanic on each card. The idea is to use the deck to generate game ideas, and to have the deck to use when others develop games using that deck.

Sadly my game design took a back seat and I really didn’t ever try to utilize Gamer Deck. Now that I am working more on my designs I want to keep the creative juices flowing, so I decided to use Gamer Deck each week for a blog series in which one day a week, I spend my train ride to work by developing a game concept using a card randomly pulled from the Gamer Deck.

And here is this week’s card: 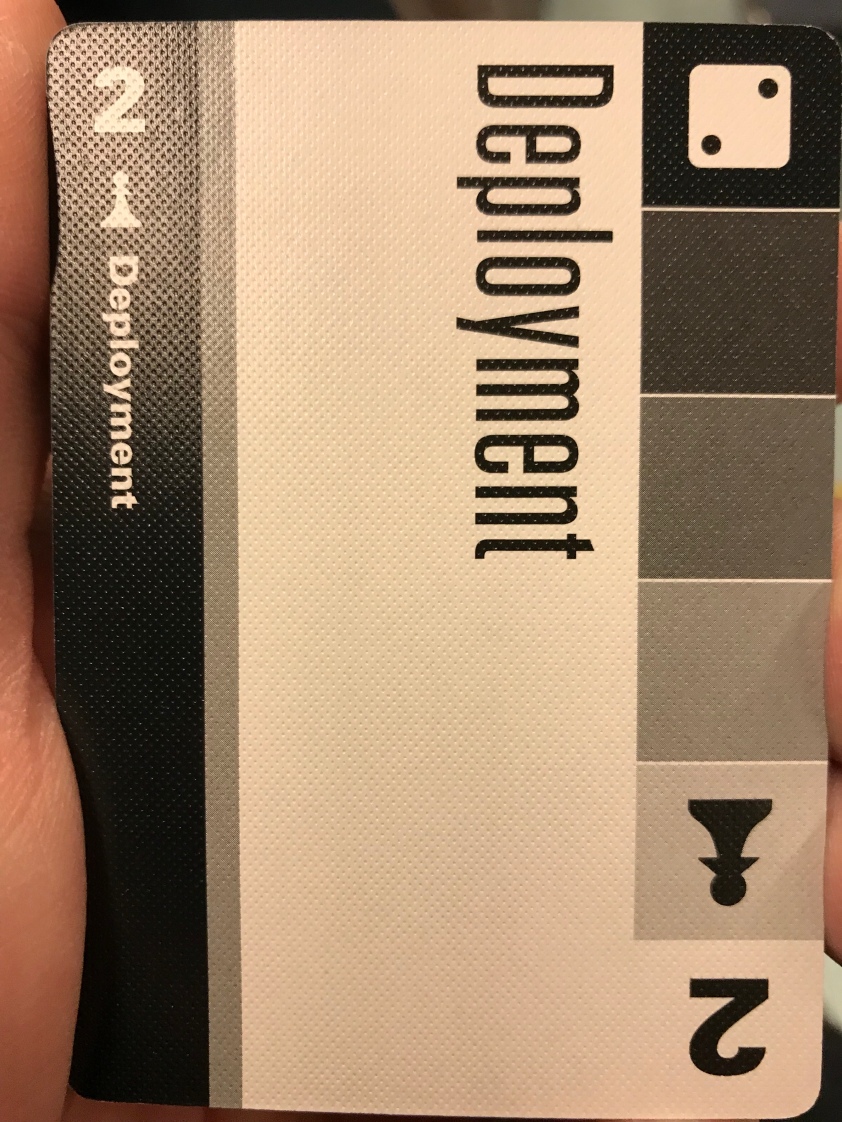 END_OF_DOCUMENT_TOKEN_TO_BE_REPLACED

And here’s a downloadable PDF for you!

I’m in a park in Burbank, CA. It’s a sunny Tuesday and I’m supposed to be collecting field data for work. I’ve got my orange vest on, my clipboard and pencils, pliers that I use to open junction boxes so that I can look at the electric wires that form the nervous system of a traffic signal. But I’m distracted. I look at my phone. A little more to the north, no, now I need to move east… Oops. Too far, back to the west a bit. What’s around here where it could be hiding? Back then I was pretty gung-ho about GeoCaching, a virtual treasure hunt where you use known GPS coordinates to locate little hidden boxes with trinkets inside. When you find it you sign the log, and if you have a trinket to leave behind, you can take a trinket from the box. I found that one, hidden in a magnetic box under one of the park benches. As I sat on that bench thinking about the cache and about the process of following the GPS to find it, I had an epiphany. I could make a game about this!