END_OF_DOCUMENT_TOKEN_TO_BE_REPLACED

Last week I had to look up the mechanic because I wasn’t quite sure exactly what the mechanic was. This week I’m very aware of Area Control and how it works, but I realize that not everyone would know necessarily. As such I think from now on I’m going to always post the BGG definition of the mechanic at hand.

The Area Control mechanic typically awards control of an area to the player that has the majority of units or influence in that area. As such, it can be viewed as a sub-category of Auction/Bidding in that players can up their “bids” for specific areas through the placement of units or meeples.

One of the various mechanics in my favorite game is area control. In Tikal players vie for control of ancient temples by having the most explorers on the site. But, this isn’t “what’s your favorite game with this mechanic”, I’m supposed to be designing a game using area control. Unlike Tikal, I want the area control to be the primary mechanic of the game, but by itself, area control isn’t necessarily a “mechanic” in the same sense that an action point system (the primary mechanic in Tikal) is. It is more of a criteria to determine who controls a location or who scores points for a location. Can we turn area control into the driving force behind a game? What would an area control game system look like? I’m thinking something where the next action taken in the game is determine by who controls specific areas… kind of like worker placement by committee I suppose. Perhaps a resource-based system where each nation or region of the board represents a different resource, and players bid for turn order by bidding a number of workers to the region that they want to collect from. However, you are bidding your workers, and those bids are placed in those regions. The region with the most workers will be the only region that produces materials that turn. All workers that were used to bid are pulled to that region but there is some kind of penalty, say one of those workers is lost and will have to be earned again. So, if I use 5 workers on coal, Jessie uses 3 workers on brick, Jan uses 4 on wood and Shawn uses 2 on cloth. Then I would collect 5 coal. Jessie would lose one worker and collect 2 coal, Jan would lose a worker and collect 3 coal, and Shawn would lose a worker and collect 1 coal. If you are vying for the bid in the same region but are outbid, then you still collect but because your workers didn’t have to travel to another region, you don’t lose any workers. But there has to be some incentive to not just follow the start player, so let’s say that you still lose a worker, then a worker produces your bid-on resource, then the rest produce at the winning mine. In the example above, Jessie would earn one brick, one coal and lose one worker. Why not just bid all of your workers though? We would have to employ other actions for the remainder of the turn that require the use of workers… building things with the collected resources, trading resources with the bank (and maybe other players too?), improving the resource collection in each region, re-hiring workers, etc…

In Mining Town you are one of several mine owners vying to have the most valuable mine. The problem, of course, is that you need the resources that are produced by the other mines in town in order to build up the town’s infrastructure and improve the efficiency of your own mine. Each improvement that you make to your mine or the town moves you one step closer to being the most valuable mine.

Mining Town is a worker placement game which employs a unique area control mechanic to determine player order and the primary resource gathered in each turn. Players bid workers by placing them on the mine that they want or need to collect resources from. Each mine needs workers, but the one with the most workers pays the most, so any workers in other mines will head over to that mine to work for the day. Some workers get mad that you made the wrong choice for where to send them, so they quit and you must re-hire them to get back to full capacity. After resource production you use your remaining workers and the resources you have collected to improve your own mine, improve the town, rehire workers that quit and trade resources with the bank and/or other players.

After a set number of rounds, the game will end and the player with the most valuable mine is the winner!

New York 1901 is a drafting area control game by designer Chenier La Salle and Blue Orange Games. The game runs about 45 minutes and plays with 2-4 players. In New York 1901 the goal is to earn the most points by erecting skyscrapers in downtown New York City in… you guessed it, 1901. A mix of tile-laying and card drafting make up the mechanics of the game, while bonus criteria drive the players to focus on certain regions of the board. Cards indicating color and size are laid out in a row and on their turn a player will draft one of those cards. The player then plays one of their four workers to a space on the board matching the chosen card. Finally, the player may build a building on any spaces on the board that they own, including the space that they just obtained. Each player has the same set of bronze, silver, and gold buildings, and there are four “legendary” skyscrapers which are available to all players. Most of the buildings take up more spaces than any given card will provide, so it is important to obtain adjacent spaces to allow you to build bigger and bigger buildings. A player is further restricted by building class. Bronze buildings are the only ones allowed to be built at the beginning of the game. Once a player reaches a certain point threshold they may build silver buildings, and another threshold unlocks the ability to build gold buildings. The player may demolish buildings to build a better one, but may only upgrade from bronze or silver to silver or gold respectively. If a player has only four un-built skyscrapers left or the open market (cards) need to be re-filled but the deck has run out, the end of the game is triggered. In addition to the points earned throughout the game by building, the players then determine the bonus points. At the beginning of the game three street cards and one bonus challenge card are chosen at random. The player who has the most buildings on each of the chosen streets receives a bonus, and in the case of a tie, no points are awarded. Points are also awarded for the bonus challenge which could be anything from who has buildings in the most districts to who has the most gold at the end of the game. The winner is the player with the most points. 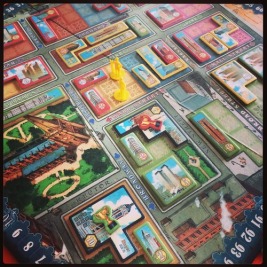 I had the opportunity to play New York 1901 in the Blue Highway Games Board Game Challenge last month and I was very happy that I did. I find that the game ticks off many of my check boxes when it comes to what I like in a game. I like drafting, and I like tile-laying, and I like area control, and New York 1901 is all of these things! The board is colorful and the graphic style of the game is pleasing. Mechanically the game has quite a few rules, but once these are grasped, the game plays fairly easily, and it isn’t all that difficult to grasp the rules. There is a somewhat Tetris-y vibe to the game since the building tiles are all in odd shapes a-la Tetris, and with all of the color flying around you get that feeling of trying to squeeze these buildings into whichever available space you can utilize efficiently. When you couple that with the decision making involved with attempting to meet the various challenges, determining which spaces to take, which spaces to hold in the hopes that nobody else takes the adjacent spaces, all in an effort to get that one bigger building on the board, well then you have a very well-rounded game in my opinion. I had been wanting to play New York 1901 since GenCon last year where it had generated a lot of buzz, but for some reason, I just didn’t make it over to those demo tables. Once the tournament was over they announced that opened copies of the game which they had used for the tournament would be sold at a discount, I jumped at the opportunity to snag a copy. Now I just hope that my family likes the game as much as I do.

Cyclades is a game for two to five players by Bruno Cathala and Ludovic Maublanc, released by Asmodee. Cyclades is an area control game in which the players bid to obtain the favors of the Greek gods Ares, Poseidon, Zeus, Athena, and Apollo. Each god grants a specific action, for example Ares allows you to place and move troops and Poseidon allows you to place and move fleets. Each god, except for Apollo also allows you to build certain buildings. The positions of the gods changes each round such that the actions will always be taking place in different orders and the last person to place a bid will be the first to place a bid the following turn. The goal of the game is to control two metropolises at the end of a turn, if you do, then you win. To build a metropolis you must build all four of the available building types or gather four philosophers from Athena. Space is tight in the aisles of Cyclades and you must battle your opponents for space. The more islands you control, the more income you generate which helps you gain the favor of the gods. If you conquer an opponent-controlled island which also contains any buildings, you gain control of those buildings as well. Gather troops and fleets to move them from island to island and battle for control. Finally, as if the favors of the gods weren’t enough call upon mythological creatures like the pegasus, cyclops, and the mighty kraken to help you in your fight!

Some people are most fond of Euro-games while others are Ameri-trash fans. I like all types of games, barring some issue that I might have with a specific one. Cyclades is a balance of several game types. It definitely has a euro-game feel with the area control, bidding, and civilization building aspects, but it also fills that Ameri-trash role with the combat (die rolls!) and awesome miniatures. I think it does what it wants to well, and keeps the players engaged. A balance between fleets, troops, and the economy are important to keep, and you want to be expanding out to the various islands to gain economic advantage, but you really have to watch yourself to make sure that your assets are protected, because anyone can just swoop in five troops on a pegasus to steal your island, and therefore your gold!