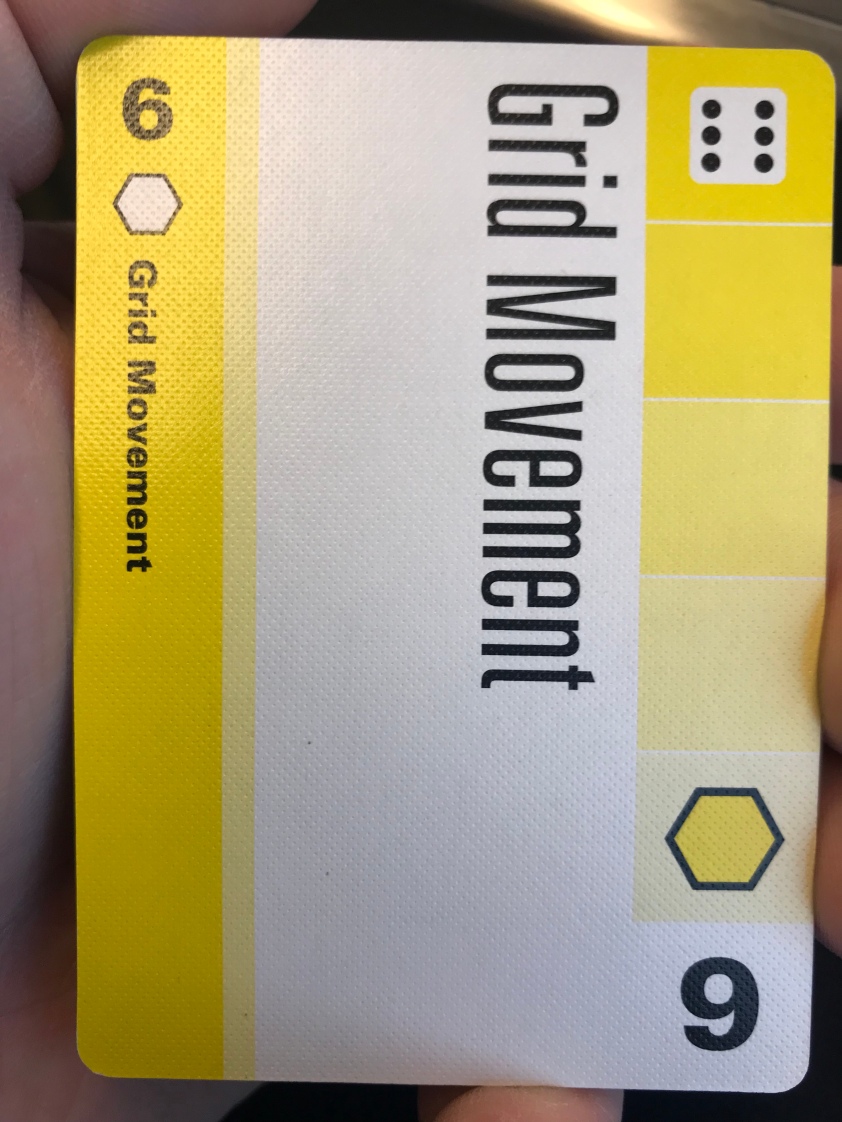 The Grid Movement occurs when pawns move on the grid in many directions. Usually the grid is square (like in Chess) or hexagonal (Abalone).

There are many classic games using the grid movement mechanic. Chess as mentioned above, or a new favorite of mine, Onitama are excellent examples. Since our card has a hex shape on it, we will certainly use hexes for our grid. I just love hexes anyway, so this isn’t much of a stretch. Hexes have six sides (duh) and our card number was a 6, so we definitely have to get the number six involved somehow as well. Perhaps to “win” a space the player must surround it on all six sides? This seems viable, but how are the spaces laid out? What kind of pawns does each player have? How do the player pawns move? Do they have any special powers? How many pawns does each player have?

The player will have 5 pawns in a 2-player game, 4 in a 3-player game or 3 in a 4-player game. I purposely am avoiding anything at six ore more so that no on player will be able to enclose a space without help from an opponent or two. Pawns will move like the Rook in chess; a straight line for any number of spaces. To setup the players will randomly place hex tiles to create the board and then they alternate placing pawns along the edge of the board. On each player’s turn they will move one pawn. This will repeat until a player places a pawn that forms a ring of pawns around a single space on the grid. The player with the most pawns around that space will claim it by placing a marker in their color on the space. Once placed that marker can never be moved. Pawns may not move onto, through, or over the marked space. The marked space does not count towards enclosing another space. This means that there will never be marked spaces adjacent to each other. The edge of the board also doesn’t count towards surrounding a space, so there will always be a path around the edge of the board that can’t be claimed.

The game will end when it becomes impossible to place another marker or to make a legal move. The player with the most markers is the winner.

One really nice thing about designing an abstract game is that theme doesn’t really play into it. I’m sure I could come up with a theme and throw it on this… and maybe that would help in terms of marketing and drawing in players, but for now, I want to just stick to the abstract strategy game.

However, there could be a system of upgrades for players who claim spaces. Perhaps the spaces on the board are pre-printed with symbols or terrains, and when a player claims a particular space, then they get a benefit related to that space. Something to the effect of allowing a single change of direction in your movement, or being able to move two pawns in your turn, but only for a limited number of spaces, etc… The nice thing about it is that the game should be fairly compelling without the powers, much like Santorini.

Envelop is an abstract strategy game for two to four players in which you are attempting to claim as many spots as possible on a variable setup grid of hexes. Move your pawns around the board and position yourself to close off hexes. The player with the most pawns surrounding a hex may claim it as their own, but as the spaces on the board fill up, movement will become more difficult, and positioning to close of those last spaces on the board, especially to ensure that you have more pawns than your opponent, will require the most strategic of minds. Do you have what it takes?